You are here: Home / News / Zenfone 6: everything about the ASUS high-end smartphone with rotating cameras

The new top-of-the-line smartphone from ASUS, Zenfone 6, was officially announced at an event in the city of Valencia, Spain. The device features expected specifications of a state-of-the-art 2019 device. And a display that occupies 92% of the front area without relying on notch or hole in the screen. Thanks to the rotating camera system deployed by the manufacturer to eliminate the need for sensors fronts.

The device comes with Qualcomm‘s most advanced processor at present, Snapdragon 855. And it brings combinations of memories with 6GB of RAM and 64GB / 128GB of storage or 8GB of RAM and 256GB of internal space. Anyone who wants more space can make use of a compatible micro SD card. it can be inserted into one of three slots in the device tray. The others are for two SIM cards. Feeding the set is a 5,000 mAh battery. This, the manufacturer says, provides up to 2 days of use.

The Zenfone 6 screen is 6.4 inches in 19.5: 9 aspect ratio. It features a panel with NanoEdge technology to guarantee 100% of the colors in the DCI-P3 standard, up to 600 nits of brightness and “cinematic quality” with resolution Full HD. All protected by a glass with Gorilla Glass 6. The display can occupy 92% of the frontal area of ​​the device. It leaves small margins around the screen without depending on notch or other type of cutout to house photographic sensors. For this, ASUS adopted a technology called Flip Camera. 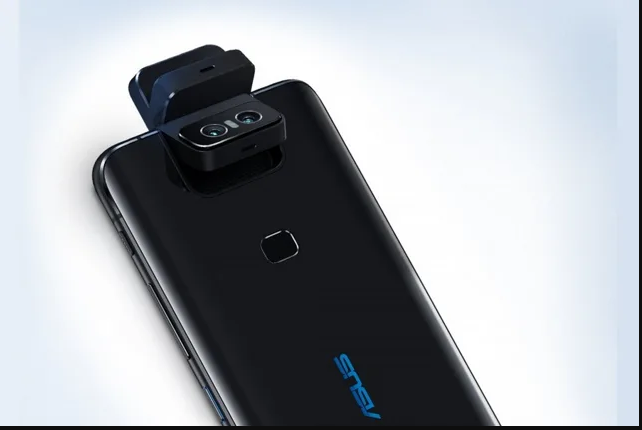 Confirming recent leaks, the Zenfone 6 comes with a motorized system that automatically rotates 180 ° the rear camera assembly. So that they position facing forward above the screen whenever the user wishes. In addition, by activating the Free Angle mode, you can position them in any position between the rear and the front. This makes it easy to capture images at high or low angles and perhaps opening up varied possibilities. Such as use your smartphone as a dashcam in your car, for example.

There are two sensors that are part of the Flip Camera. The main being a SONY IMX586 48 MP, aperture lens f / 1.79 and autofocus two for an OCL PDAF. And the secondary one superwide 13 MP 125 ° with distortion correction In real time. To avoid problems with crashes, ASUS has included an internal sensor in the module to detect sudden accelerations This causes the cameras to return to a safe position if the device falls.

The new Zenfone also features automatic panorama mode, motion tracking, HDR + Enhanced and Super Night. Giving you the possibility of improved shots in both bright and dark situations and in the dark of night.

In the software part, the device has been factory running the ZenUI 6. The ASUS modification for Android 9.0 Pie. In addition to promising a cleaner interface and smooth animations, the maker says the system will include features such as a Dark Mode and news for easy one-handed use. This includes commands and other apps organized along the sides of the screen.

You can customize the Smart Key physical button on the side of Zenfone 6 to start different actions. Such as Google Assistant tasks, when you press the key once or twice and when it is held down.

The device will feature the ZenEar Pro’s most luxurious headphones. They were developed in partnership with 1MORE to ensure “superior sound for a more immersive experience,” according to a statement from ASUS. Another novelty is a new private listening mode. It plays voice messages and interactions with Google Assistant only through the headset when it is plugged in. This prevents people around you from hearing anything.

How much and when?

The expectation is that it will be on the shelves in black and silver next week, on the 25th.

You can get an overview of the features in the following table: