You are here: Home / Apps / Google Photos can soon stop syncing your images in Drive

Many users of Google services, like Photos, took advantage of the ease of accessing the images through Drive‘s cloud storage system. Now it looks like the company is trying to separate the two services into a change. This should start coming in from July. Means no Syncing of Google Photos on Drive.

Developers started to study Drive’s application code. They noticed two notifications which show that the users will not be able to automatically access the images uploaded to Google Photos by Drive. The data found were as follows:

“Starting in July, your Google Photos library will no longer be synced to Google Drive. All your files will be safe in Google Photos.”

“Your Google Photos folder is no longer syncing with Google Drive. All your photos are safe in Google Photos.”

After a long time appearing as an option within Google Drive, Google hid Photos from most users. They had to go through the storage service settings to create a folder for the service and then sync it with the image’s Google.

According to code, users will receive the first warning message until the beginning of July. Then the synchronization of the folder that they had created will end and they will receive the second warning. 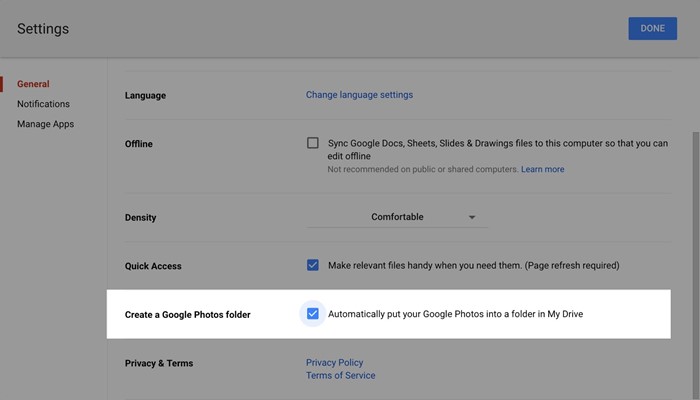 For now, this change should affect only the users of the mobile version. Since accessing the Drive by the desktop no notification about the end of the sync is revealed. Google has not yet officially pronounced on the matter.