You are here: Home / Apps / Currents: Google+ is transformed into business communication app

Google+ joined the list of products Google that did not really catch. Now the company offers an application similar to the old social network. But it focuses on the corporate segment. Called Currents, the service is designed for G Suite users.

According to a company publication , the platform “enables people to have meaningful discussions and interactions throughout their organization, helping to keep everyone informed and giving leaders the opportunity to connect with their employees.”

The business communication tool, of course, must prioritize publications from managers, managers, supervisors and other leadership positions. This content may have different formats and receive comments / feedback from other contributors. According to Google, Currents will work as a way for companies to increase their visibility and alignment of internal ideas or proposals. 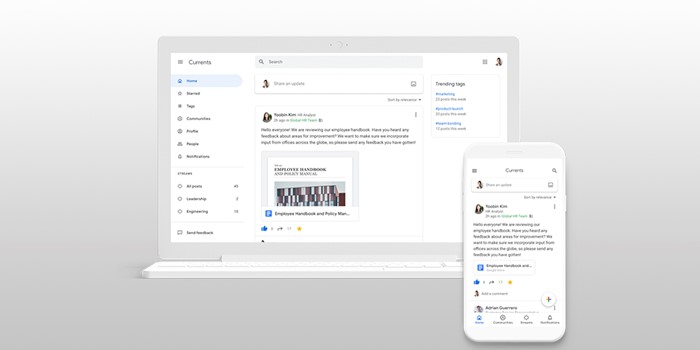 By having a social network format, app posts allow the users to be able to revisit them whenever they need.  The function of organizing these contents in chronological order facilitates this search. This means they should appear originally in order of relevance.

In an even cleaner version, the service has design and apparently functions very similar to what Google+ offered. This is also not the first time Google names a product that way.

The company launched in 2012 an app that ran as an electronic magazine under the name ” Currents”. It later turned the app into Google Play Newsstand. And then they repositioned it as Google News, as we know it today. For now, the new Currents can be found in the English beta. Google did not say when it will release the final version in other languages.

Also Read: WhatsApp will have option of animated figurines in the messages