You are here: Home / News / German company to begin tests with trucks without drivers on roads

Daimler Trucks will begin in June a global organization project to place trucks without drivers on the road until the next decade. The company plans to create an automated roadmap for these vehicles. And it will set up the appropriate infrastructure for its transportation activities. This includes a complete network of operations to meet this type of demand.

The company is one of the largest truck manufacturers in the world. And it’s a subsidiary of Germany‘s Daimler AG. That also owns Mercedes-Benz.

Recommended: See which creature was vetoed from “Detective Pikachu “

Daimler Trucks plans to test long haul trucks for long haul with level 4 autonomy. This means that vehicles are capable of driving alone. And human intervention is optional. For security, the company intends to build a control center. As well as additional stations in logistics centers. 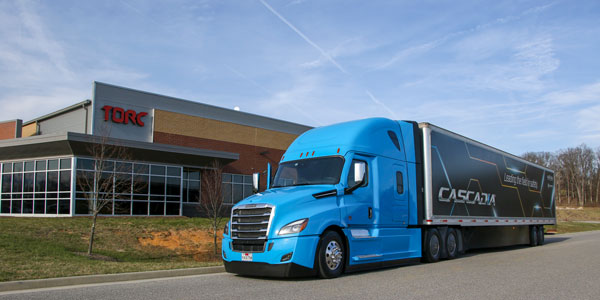 To put the plan into practice, Daimler Trucks will partner with Torc Robotics at its headquarters in Virginia, United States. Torc Robotics is the maker of freelance truck software.  In addition, it will set up a team of specialists to work at its facilities in the North American city of Portland and Stuttgart, Germany. In the future, it should also include other locations in your network.

We were expecting the Daimler Trucks initiative since January of this year. It’s when the company announced during CES 2019 the investment of 570 million dollars in automated trucks.

“We will be in the perfect position to put the highly automated steering on the road, making transportation safer, saving lives and helping trucking companies increase their productivity,” Martin Daum, a member of the company’s board of directors, said in a statement.